I’ve wanted (yearned, is more accurate) to go to China and experience where my life’s professional focus for over 20 years, Feng Shui, originated.

So, this October, my husband, Jim, and I joined Master Jodi Brunner and five international Feng Shui practitioners for a ten-day study tour in China. We visited Beijing and Xian, as well as significant ancient villages displaying early earth-form Feng Shui principles.

We also saw significant world heritage sites along the way, such as the Great Wall, Forbidden City, and the Terracotta Warriors.

The flow of natural energy and how we tap into it has always intrigued me. These abstract concepts were realistically demonstrated through daily lectures and walking tours of ancient and modern Chinese settlements.

In preparation for this trip, I also read, “The Feng Shui Diaries: The Meanderings of a Feng Shui Man in the Year of the Wood Rooster”, written in 2005 by, Feng Shui Master, Richard Ashworth. He journaled a number of Feng Shui principles that I subsequently experienced first-hand on the tour.

I’d like to summarize my significant revelations that came as a result of this experience, using some quotations from Richard’s, “Diaries”. I’ve noted my “epiphanies” in italics after each quote.

“Feng Shui is an attempt to wrench time and space into a single system; so, it can be used to predict and prescribe right time and right place.”
Feng Shui energy patterns change. They are not static. Remedies that are appropriate today may not work as well in the same way in the future. However, an important caveat is that there are some immutable land-form principles that have relevance for centuries. Chinese palaces and temples tried to capture the beneficial essence for centuries not just years.
(From Solar Fortnight Beginning: Friday, September 23, 2005, 06:4) 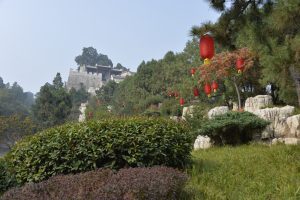 “Chi comes down from the mountain on the wind (Feng) where it is held by the water (Shui). Most Feng Shui procedures involve water.”
In the past, I’ve concentrated my analysis on a building sitting on a parcel of land. Feng Shui has a much larger context than this. Natural land-forms surrounding a subject property are very important. It’s essential to look at everything in its next largest context.
(From Solar Fortnight Beginning Tuesday, 21 December, 2004 20:33) 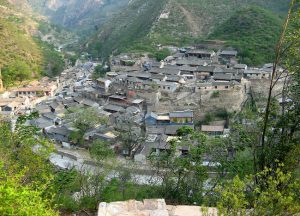 “The windows are the eyes of the house and the front door is the mouth. Opening them leads to movement.” A building is really more organic than we give it credit for. It can hold happiness/sadness, health/illness, prosperity/depletion. It’s a living essence. Ancient Chinese houses took advantage of a courtyard layout with doors and windows into the space. Their homes were introverted, ours more extroverted.
(From Solar Fortnight Beginning Tuesday, 21 December, 2004 20:33) 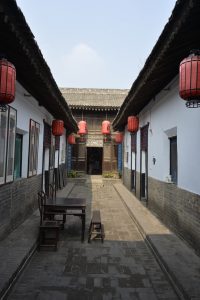 “As long ago as 4,000 BCE the Chinese were building houses with front doors on the ideal Feng Shui axis, just off due south, which happens also to be the warmest place in the days following the Winter Solstice.”
In an age of air conditioning and geometric subdivision layouts, we’ve lost sight of this most basic principle to create comfortable living spaces. Unfortunately, modern Chinese urban planning seems also to have lost sight of this principle.
(From Solar Fortnight Beginning Tuesday 21 December 2004 20.33.) 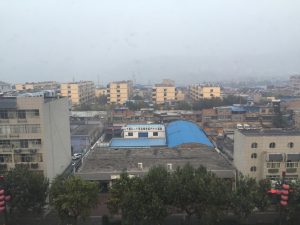 View from the Hancheng International Hotel of center city.

“The purpose of Feng Shui is to maintain balance…Each of the elements – wood, fire, earth, metal and water – has a distinct individual nature and a whole body of symbolic meanings.”
Our Western culture indoctrinates us in mass marketing symbolism. In Ancient China, the symbolism focused on imperial power, Buddhist tranquility, and clan solidarity.
(From Solar Fortnight Beginning Tuesday 21 December 2004 20.33) 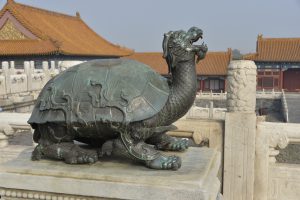 “Dragon mountain relates to the area where one range melds into a “level plain at the edge where another range starts…Perfect chi is where the ranges meet.”
I never really understood the concept of Dragon energy, until I saw the mountain landforms in China.  Now, I better appreciate the five different types of mountain forms…wood, fire, earth, metal, water. We have water mountains in East Tennessee. These undulating waves of ridge tops are quite different from the spiney dragon backs of Chinese mountains. 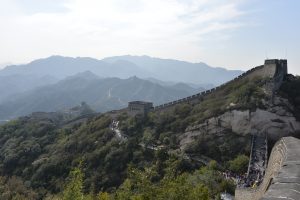 The Badaling segment of the Great Wall northwest of Beijing.

I was attracted to this particular Feng Shui study tour, because it was titled, “Chasing the Dragon”.  Before the trip I didn’t fully understand the symbolism of Dragon as it applies to Chinese landforms, their mythology, and ancient cultural practices. For me what came to mind was the Chinese New Year serpentine dragon undulating its way down the street.

It has far greater depth of meaning for me now. The Dragon is living energy in all its forms.

Master Richard Ashworth’s book, The Feng Shui Diaries: The Meanderings of a Feng Shui Man in the Year of the Wood Rooster, is available from Kindle Books, or, http://www.imperialfengshui.info/.

3 responses to “2017 Lessons Learned from China”

Got a Feng Shui question for Nancy? Go here to ask your question and have it answered on our blog.